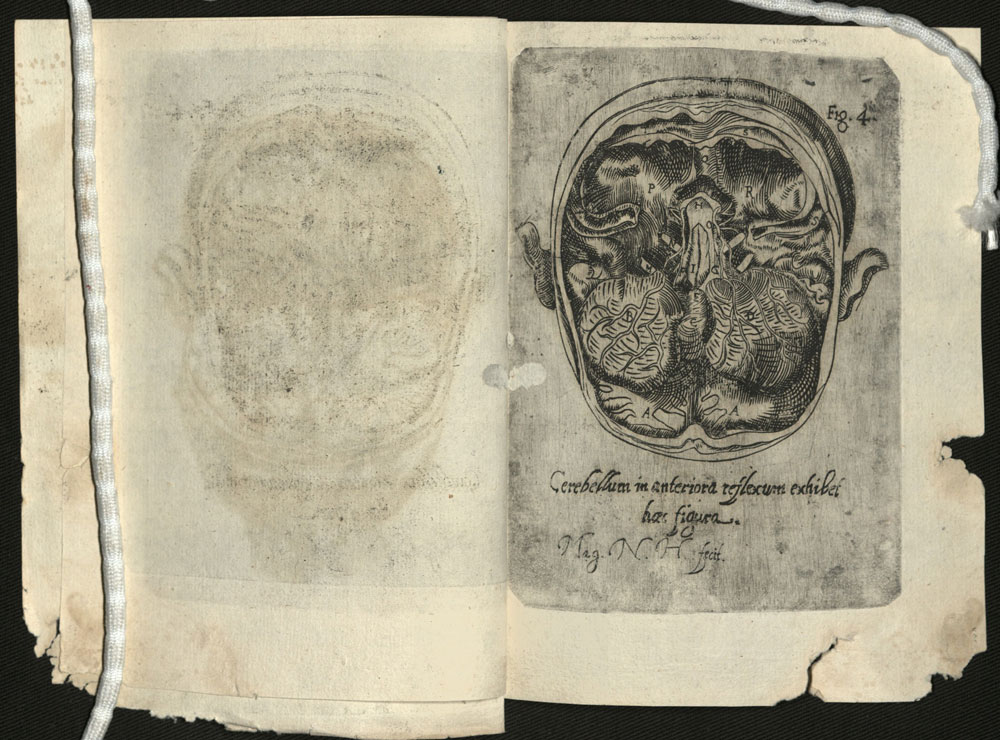 The first dissertation printed in Sweden illustrated with engravings is De cerebro humano printed in 1646. It is a small dissertation in quarto format of only sixteen pages illustrated with four engravings depicting the human brain. The first plate is signed in Latin `Magnus N. Helsing fecit´ giving us a clue to the artist´s identity, Magnus Nicolaus Celsius. He was a skilled engraver who later would illustrate three more dissertations and one treatise. Since a full discussion of all his engravings in these works would require a rather long text, the aim of this blog post is to give a short presentation of Celsius himself and of his engravings in De cerebro humano of 1646.

Magnus Nicolaus Celsius (1621-1679) was a Swedish mathematician, astronomer, and botanist, a versatile polymath active at Uppsala University during most of his life. He was the first of many in the Celsius family to become a scientist. Two of his sons were professors at Uppsala University and he was the grandfather of Anders Celsius who proposed the Celsius temperature scale, and there were others as well. After several years of studies at the university he became lecturer in 1655, and after being extraordinary professor for some years he became ordinary professor of mathematics in 1668, and between 1674 and 1675 he served as rector. Two years later he was ordained a priest and became a vicar in Old Uppsala before he passed away in 1679. Today Celsius is foremost known for deciphering the Hälsinge runes in the 1670s.

Celsius´s work as an engraver is one of his less known activities. Only a few engravings by him are known today and they were all made between 1646 and 1661 as illustrations in the four dissertations and the treatise mentioned above, printed at Uppsala University. Where he learned to engrave and where the impulse to do so might have come from is unknown, although he also made his own mathematical and astronomical instruments, suggesting a wider interest and skill for metalwork. There were others making engravings for dissertations at the university in the seventeenth century as well, but all of them except one are printed between the late 1660s and 1690s, several years after Celsius made his last engraving.

De cerebro humano was his third dissertation as a student at the university, where he enrolled in 1641. His uncle Olaus Unonius, professor of logics and metaphysics, was praeses and could preside over a dissertation in anatomy, here the human brain. As mentioned above it has a total of sixteen pages of text and four illustrations. The first four pages constitute the title and the dedication, followed by eleven pages of text ending with gratulations to the young student on the last page. There are different opinions regarding who wrote the dissertation, but we do know that Celsius made the engravings. Two of the images are full page engravings while the other two are smaller and fitted onto one and the same plate. Besides being the first known engravings Celsius did and the first engravings in a dissertation in Sweden, they are also the first illustrations in an anatomical dissertation in the country.

A study of the engravings and their relation to the text is very interesting, since it reveals that Celsius is firmly working within the established tradition of anatomical illustration dating back to Andreas Vesalius (1514-1564) and his revolutionary work Fabrica of 1543, whose illustrations influenced later anatomical works for centuries. This is evident in that all four figures, besides being numbered all have small key letters referring to the text where that specific part is discussed and marked by the same letter, and also in that all the figures themselves derive from images in the Fabrica. Either Celsius had direct access to the great work, or more likely to one of the many anatomical books where Vesalius´s woodcuts were copied, maybe held in the university library or in one of the professors´ private libraries.

Of further note is that Celsius has engraved his own name on two of the plates, `Magnus N. Helsing fecit´ on the first plate, and `Mag. N. H. fecit´ on the last plate, at the time his name was Helsingius but later he would change it to Celsius. There is no reason not to assume that Celsius engraved all three plates himself even though he did not sign his name on the second plate. A closer examination reveals that Celsius´s figures in these three plates, as well as the later ones, often are made by a combination of line engraving and etching.

De cerebro humano is known in only a few copies in Sweden, of which some are held at the Hagströmer Library, the National Library of Sweden, and the Uppsala University Library.